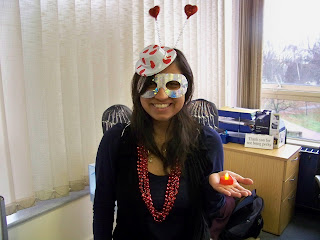 
The cruellest month...? No, that's another one.

You can find out what we're doing to celebrate the day elsewhere on the site, but for the moment, here's a quick caption competition for you. Leave a comment with your idea and we'll choose the best to garland this picture in the foyer on the night.

There'll even be a prize!
Posted by The Green Room at 20:55 No comments:

I was asked this question the other day and straight away I answered "Singing In The Rain". No hesitation.

And it is my favourite film, or at least it was at that moment.

But hard on it's heels came the realisation that the film I own several copies of (VHS, two dvd's - different special features!, blu ray, download), and watch at least once a year, is The Long Good Friday. And I really love that film, but it didn't pop immediately into my head.

So, with that in mind, I thought I'd find out what everyone else's favourite films were - the first title to pop into your head, not a list, no prevarication. The answers were interesting:

So, how many of those would be on your list? And what is your favourite film? Answers in the comments below, please...
Posted by The Green Room at 16:52 1 comment:

On 11 & 12 December 2011, the Hawthorne Theatre was the site of an incident that required the attention of the Council's CDC-trained staff. A virulent outbreak occurred just as a film was about to start, leading to a quarantine situation and decontamination protocol for all patrons.

The incident was contained and no one was harmed, but it was decided to keep the details hidden so as to avoid mass panic. However, one lone cameraman was able to take the following footage and the truth has emerged.

CONTAGION - the truth needs to be told!