As the audience took their seats, we were instantly welcomed back in time to the Victorian
streets of London, as sound effects from the time and place were piped in to the small
theatre. This trip back in time became even more apparent when the actors portraying
Oscar Wilde and Mrs Robinson graced the stage.

In Extremis is based on a true event of Oscar Wildeʼs life but is really the story of his
society palm reader, Mrs Robinson. Set 24th March 1895 it is the imagination of what may
have happened in that room just a week before his trial, to make Wilde stick around.
Imagination only seeing as Mrs Robinson tells the theatre that they were the only two in
the room that night and now they are both dead so no one will ever know what really
occurred.

Immediately the fourth wall is broken by Mrs Robinson talking to the audience with Wilde
in the background. This tool which is used throughout, allows the audience to hear what
both wished they had said opposed to what they actually said to each other, either to
protect their career in Robinsonʼs case or to protect his name in Wildeʼs. As the story and
the characters thoughts play-out, it becomes increasingly sad as Wilde admits his real true
love for, not his wife, but for a man. His words that almost hurt him to say allowed to the
room are never said out loud to Mrs Robinson and the fact he doesnʼt allow himself to do
so seems the saddest fact of all.

The actors portrayed very believable characters which really pulled you in to the situation
and emotions at hand. Oscar Wilde originally portrayed as stubborn, fast paced and
perhaps a little snobbish, but the moments where we hear his true feelings itʼs impossible
to not feel for this famous man. 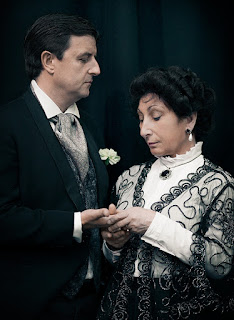 Our next review will be on Intimate Letters, starring acclaimed actor Timothy West. We can't wait!
Tickets available here if you would like to join us http://hawthornetheatre.co.uk/pavaostringquartet.html