Check out these great reviews from the Campus West Review Team!


Check out these great reviews from the Campus West Review Team!

These 3 reviews are from Shhh! World Premiere Performance Thurs 4th May. 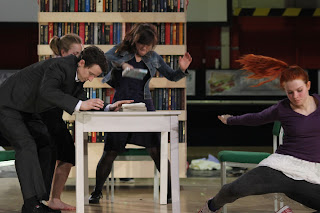 Kim's Review
Went to Sshhh! at Hawthorne-Theatre Campus-West﻿last night and loved it.  I was a bit skeptical as I had never been to anything like this before, but to my surprise I really enjoyed it.  It was set in a library and involved the lives of young people and their experiences in love life and music. The set involved 3 large bookcases on wheels which were cleverly moved round the stage to complement the dancing.  I was not sure if they were going to sing at times as they seemed to lead you into thinking that.  It was only dance which was very well choreographed and very well done by the talented cast.  The music incorporated many different genres including dubstep, classical, rock and jazz.  The cast were very energetic using the entire stage......goodness how they managed to keep going!!  On the whole would recommend it to everybody.  This is my first time as a reviewer for Hawthorne Theatre and I am looking forward to the next show!!

Tracey's Review
Wow, what a night, went to see a show at the Hawthorne Theatre, Campus West, called Shhh! Taking part in the review team for Campus West is a great idea, hopefully reviewers will encourage more people to attend shows they may never have thought of before!

I’ve never been to a contemporary dance show before but it was amazing! The show was based on the lives of young people in a library. The main props were 3 big book shelves, the odd table and chairs plus of course books which found themselves occasionally being thrown through the air. There were lots of fantastic dance moves, poses, running and jumping to some great music although I did keep expecting them to burst into song. The stage was used to every inch, was a bit concerned they might do themselves an injury with all the moving of the book shelves!  At times I found the music a bit loud and vibrated but that could just be my ears – I’m not getting any younger!

The dancers were fantastic bouncing around the stage for 60+ mins is no mean feat, they certainly threw themselves into their parts with expressions to match the music and stories. Loved the part where they wore headphones, each listening to their favourite style of music, from the delicate to the heavy. They should be very proud of themselves.

Jane's Review
Last night I was lucky enough to be invited along to the Hawthorne Theatre at the Campus West in WGC to watch the world premiere (no less!!) of Shhh! A contemporary dance piece set in a closed down library.
Overall I enjoyed the show, and as I left the theatre, amongst the hundreds of images left whirling around in my head, I found myself considering the consequences of the sad fate of many of our now-closed libraries, and the implications of this for the different people who use them.

Hope you enjoyed the reviews! There will be more to follow from In Extremis this Friday at 7.30pm.
http://hawthornetheatre.co.uk/inextremis.html