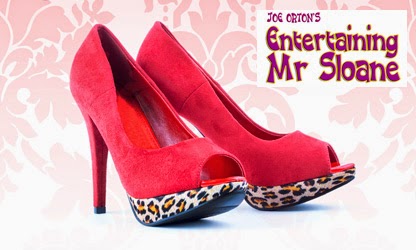 So I walk into the auditorium at the Hawthorne for the second time this week, not knowing that for the next two hours I will be taken back to the sixties, and transported into a wonderfully quirky time warp.
The first thing that caught my attention was the incredibly original and detailed set. By placing the entire play in the living room of Kemp and his daughter Kath, along with the frantically stacked scenery, it established a space of familiarity and comfort for the viewer. What could only be described as ‘organised chaos’ really created the sense of lost belongings without a place in life and this gave us an early indication as to the unusually eccentric life of Kemp and Kath who resided there.
The inanimate objects scattered around the stage really reflected the feeling of the four cast members in the production with their longing for interaction, attention and undoubtedly, physical contact. I felt that even though each character held a very different personality and pathway in life, they did share the constant desire for acceptance and recognition throughout the piece. Kath, being a middle-aged woman and still devastated from the loss of her baby, was full of desperation in craving attention from younger males to fill the void whilst. I witnessed Pauline Whitaker convey just the right amount of delicate femininity balanced with a naughtier, wild side that continued to keep the audience on the edge of their seats!
Kath’s adorable father Kemp was an elderly man in what seemed like his final years. It was clear that there was nothing in his life worth waiting for anymore apart from perhaps the odd, slowly toasted crumpet! Even though his death wasn’t a terrible shock to the clued-up audience, it still brought an air of sadness as we all related to the vulnerable old gentleman.
Ed, I felt was an amusingly complex character. Confused in his sexuality and unsure of his place in society, there was a persistent need for respect and acknowledgement brought out in the piece. Homosexuality was heavily frowned upon at that time and I felt a strong sense of underlying resentment from the writer, Joe Orton who was a gay man in the sixties, portrayed through Ed’s unfulfilled character.
My favourite character in the performance, however, was the very cutting Mr Sloane. With each layer of clothing taken off by Mr Sloane (and believe me there were a few!) we were led down an increasingly dark path into the history of a very seductive but secretive young man.
Played by Actor Paul Sandys, charm and wit oozed from every line spoken, capturing the audience with ease from start to finish. With a distinctly convincing performance, our initial suspicion gradually progressed into sympathy as we grew to see the ‘lost boy’ in Sloane simply searching for a secure home and parental figure, perhaps not in the form of Kath however, who succeeded in taking advantage of a naive boy’s hunger for affection.
All four actors in the performance completely committed to their roles and I believe they did extremely well to convey the increasing sexual tension and ambiguity included within the play. Personally, I feel this well cast production explored the more vulnerable aspects to the story, taking the public on a journey of emotions built up by dramatic tension with splintered intervals of comical genius.
Along with the wacky set, the costumes immediately pulled me back to the sixties, with Kath’s frilly pink nightdress being my favourite. With sexual tension radiating in that particular scene, the feminine allure was evidently too hard to resist for an already half naked Mr Sloane as he proceeded to take off yet another item of clothing… no complaints from us, mind!
Orton’s subtly sadistic script concealed twists and turns to make for a very gripping and intense viewing, and I found Ed’s line to Sloane to be especially amusing when he advised that ‘Women are like banks, boy… breaking and entering is a serious business!’
The racy nature of the play suggests a tone well ahead of its time considering it had been written 50 years ago, which just displays the incredible talent possessed by the late playwright.
Although Joe Orton had an unexpected tragic end to his life, I feel his wit and intelligence live on through the exquisite play that is Entertaining Mr Sloane.
Posted by Unknown at 11:22