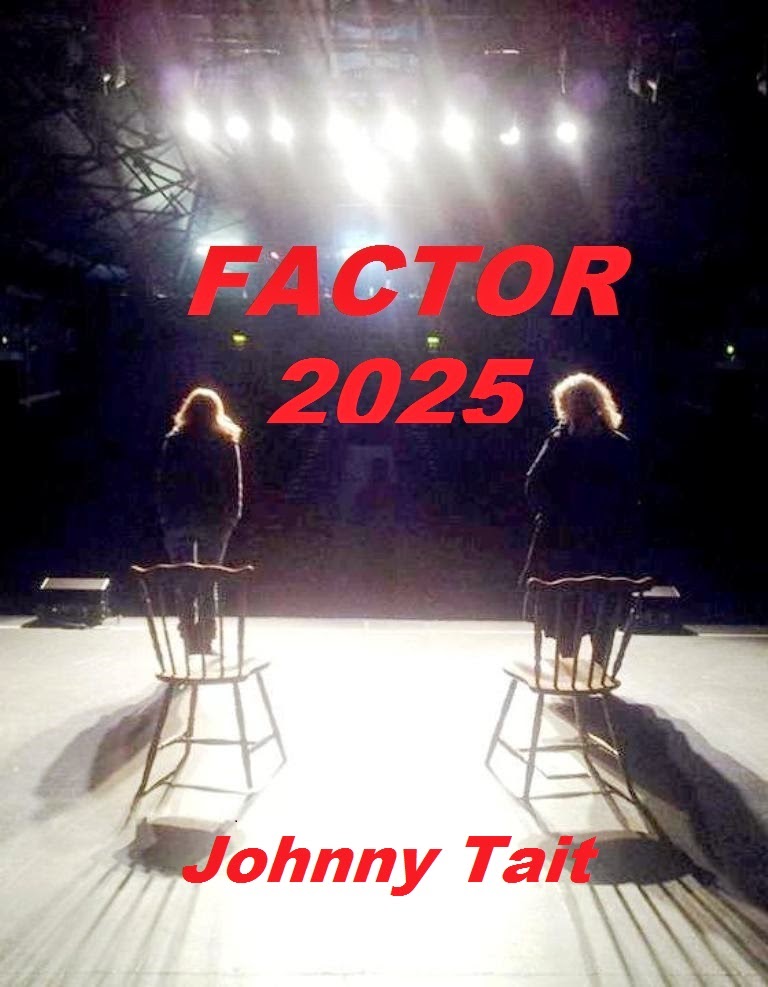 It was a dilemma any reality TV loving viewer will face…. Do I stay in and watch the first live show of The Voice or go out on a Saturday night, but risk seeing the result on social networks before having the time to catch up on Sky +?!
After a slight deliberation and the lure of a special guest star, the theatre won and I pulled on my reviewer cap and off I went to see Factor 2025.
Ironically the play was about the demise of TV talent shows and the mindset of the modern viewer, so my earlier deliberation was rather fitting.
Johnny Tait was the mastermind behind the piece and playing the pivotal character ‘Trenton Powell’ (no guesses as to which reality supremo he was emulating) he raised more than a few laughs from the audience.  With a script littered with risky jokes, near the mark innuendoes and shocking revelations, it kept me laughing even when I knew I shouldn’t.
The story centred around Powell and the newest series of his failing reality show, but instead of focusing on talent, the main aim was to exaggerate the unfortunate stories of the contestants for audience pleasure, resulting in higher viewing figures.

I found myself anaslysing this throughout the piece asking myself what kind of people are we as a viewing nation if negative stories and bad news make us hungry for more, more, more! (apologies for the ‘in-joke,’ I supposed you had to be there.)
A highlight of the show was a completely unexpected near naked cameo by Celebrity Big Brother winner Alex Reid, who threw all inhibitions out of the window and strutted his stuff on stage wearing a tighter pair of hotpants than Kyle Minogue. Thank goodness my sister was present, otherwise I may have lost myself and thrown in a few wolf whistles and whoops for good measure!
The talent that was interspersed throughout the play showcased a few rising stars, and a comically timed rendition of ‘On My Own’ was a real highlight.
Tait has really wrapped up the modern viewers cynicism in a neat little package of quick humour, relatable scripting and personable anecdotes. Providing a well rounded evening of entertainment that was worth missing The Voice for!
So what is the future of reality TV shows? As an audience are we going to push for more obscure and negative stories, is ‘talent’ going to run out, or will we be driven back to classic mediums of entertainment? Whatever the outcome, you can be sure I will be one of those entertainment junkies following the turbulent journey of the manipulated contestant until our very own Mr Cowell puts the idea to bed.
And on that note…night x

Well it was show time again at the Hawthorne Theatre tonight with a hilarious performance full of twists and turns, witty humour and very toned buttocks! ‘Factor 2025’, written by Johnny Tait explores the backstage antics and drama of a typical televised talent contest in a clever, relatable way.
Starring Alex Reid (Big Brother Winner and Katie Price’s Ex Hubby) as ‘Joey, who’s good with computers’ showed there is more to the cage fighter than an abs-olutely fantastic physique! The GSA (Guilford School of Acting) graduate gave us our GDA of hunky chizzled muscles, not to mention the guideline daily amount of H20 as he squirted water all over the unprepared audience! Needless to say there were a lot of wet ladies after his strut around the stage in just a little pair of red hotpants!
Tait’s well-written but highly risqué play displayed an array of characters and acts, keeping the audience thoroughly entertained throughout with dancers, singers and even poetry readers – each possessing contrasting levels of talent from sweet soloists to comedic drag acts!
Mr Powell, brought to life by Johnny Tait himself was accompanied by his pretty ass-istant who help sift through the good, the bad and the angry to find the sob stories that we as a nation know and love too well, even if they had to make up a few porkie-pies in the process! It was very refreshing to see Tait play a grotesque, seedy, money driven man who was willing to put fame and fortune before morals – and those were just his good points!
Despite the multitude of talent on the stage, one of my favourite auditionees was 52 yr old George, who rocked out like there was no tomorrow and let the audience join in his private party by singing and clapping along. With his amazing ability to capture each member of public’s attention, it was safe to say that he definitely left us wanting more, more, more!
Personally, I feel the best part about ‘Factor 2025’ was how everyone watching was made aware of the harsh reality of how easily the TV industry manipulates poor, innocent people, prying on their vulnerability in their search for stardom.  The audience participation was key to the success of the show, engaging the entire auditorium and really involving us on the emotional journey created by Tait.
All in all, a big congratulations to a budding cast, who without a doubt have the ‘X-Factor’ and definitely provided a great insight into the world of reality television – ‘Behind the Screens’, with special recognition going out to Alex Reid for his surprising transition from Cage to Stage!
Overall, another great show put on in the city of Welwyn Garden with a shocking twist ending which really made the show go out with a controversial (and quite incestuous) bang!
#onlythingmissingwasdermot
Jasmine Alice
Posted by Unknown at 11:31